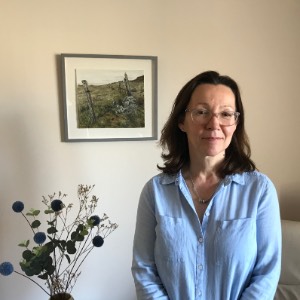 The Caithness landscape inspires my art

Having grown up on a farm situated between Lybster and Latheron she remembers, "We could go more or less where we wanted over the hills.”

Having studied fashion and textiles at Galashiels – School of Textiles and Design, Magi's first career was in the fashion industry, the latter part working for 'Pringle of Scotland' until its closure in 2008. This prompted her decision to fulfil her lifelong dream to attend art college.

As a mature student Magi spent four years at Edinburgh College of Art studying drawing and painting. During this time she embarked upon a project based around the Whaligoe Steps at Ulbster, a few miles north of Lybster in Caithness.

She describes the unique steps which zig-zag down the steep cliffs to a natural haven and explains how the landscape and sea colour changes with the weather. She talks about her admiration for the women who, in the time of the herring fishing industry, carried fish in baskets on their backs as they climbed the 320 steps up the cliff, before walking into the town of Wick, eight miles away.

For her final year project, Magi chose to study the Flow Country, a peatland bog

in the middle of the counties of Sutherland and Caithness and a proposed UNESCO World Heritage Site. She says, "It's like being out in the wilderness. Sitting in the quietness, everything comes to you, dragonflies, frogs, newts and little birds pop up and down from the ground.”

She explains, "I found it really amazing, with the sky mirrored in a series of pools. The colours are beautiful and have been likened to a Persian carpet in appearance.”

Due to the acidic terrain, there are many unusual plants such as the insect-capturing Sundew plant, the Bogbean and Bog Cotton.

During this interview, Magi describes her recent work and exhibitions. She works part-time at Thurso Art Gallery and regularly travels along the wild, open road of the Causewaymire, between Latheron and Thurso. The transformation in the colour and skies inspired her exhibition, From the Causewaymire.

Magi reflects upon her return to Caithness in 2014 and feels she has slipped back into the way of life and is inspired by the landscape and wide-open skies of the county.