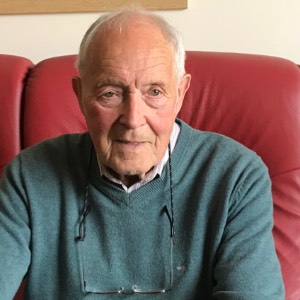 
"Summer Holidays up in Caithness were something else – nothing like it,” says James Sutherland.

During this interview, James talks about his happy memories of spending the summer holidays with family in Caithness. Although he was born in Gartymore and brought up in Helmsdale, his mother and father originally came from Caithness.

During the holidays James recalls, *We went from Helmsdale to Wick on the railway, as my father was an engine driver. When we got to Wick, we transferred on to the Lybster railway and got off at Occumster where the taxi was waiting - a great big Clydesdale horse, my uncle, and an iron wheel cart that took us the one and a half miles up the road to Roster.”

Days were spent guddling for trout in the burn, helping stack the peats, and generally having a great time. James also describes life on the croft with no electricity or running water.

He remembers stories told by his Granny Miller from Clyth. She talked about her time at the herring fishing and how she regularly carried a basket of herring on her back as she climbed the steps at Whaligoe before embarking on the long walk into Wick.

He also describes two massive craters close to his Granny's house at The Moors, East Clyth. The craters resulted from bombs being dropped during the Second World War. Despite the doors and windows being shattered, miraculously no one was injured.