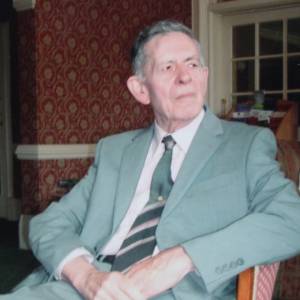 The boy that Hitler couldn't kill


Listen to the late George Cameron reliving the horrific ordeal of the Hill Avenue bombing of 1940, and describing how he became known as "the boy that Hitler couldn't kill".

George was 14 at the time of the devastating blast that claimed the lives of his sister Betty (10) and brother John (6). "You felt that your body was filled with electricity and you felt that your whole body was being thrown up in the air – which it was, no doubt," he recalls. "There was a dreadful sensation of flame and heat and stabbing pains in one's legs."

Shortly after 6pm on October 26th 1940 three Heinkels flew over Wick, firing machine guns on the main streets and dropping high explosives on the north side of the town. Two bombs landed in front of the bungalow at 6 Hill Avenue, home of John and Georgina Cameron and their three children. After a tense of a few seconds, there was a blinding flash and a massive explosion.

Mr Cameron rushed the short distance from his grocery shop to find his home in ruins and his family suffering terrible injuries. Mrs Cameron and the children were carried to the nearby Bignold Hospital, which itself had been bomb-damaged. Betty and her brother John died soon afterwards. George and his mother survived, although their injuries were so severe that they spent months in a military convalescence home at Forse House.

Dorothy Dyer (20), the wife of an RAF sergeant stationed at the nearby aerodrome, and who had been billeted with the Cameron family, was killed outright.

It was 48 years later, when he was 62, that George gave this interview. His reminiscences also touch upon other aspects of wartime, such as watching the aircraft coming and going at the aerodrome, the blackout, rationing, air-raid shelters and anti-invasion measures in the countryside.

As well as claiming three lives, the attack of October 1940 left 13 people injured. It happened less than four months after the bombing of Bank Row, in which 15 people died. The victims of both raids are commemorated in the Bank Row memorial garden in Wick.

After graduating from university George went into teaching and spent most of his career working in the Glasgow area before returning to Wick. He passed away in 2015.

This interview was conducted in the 1980s as part of a job creation project funded by the Manpower Services Commission. The aim of the project was to collect memories of life in Caithness in spoken and written form.

The recording has since been digitised and re-edited.

With gratitude to George's wife, Isobel Cameron, for allowing Wick Voices to use the interview.