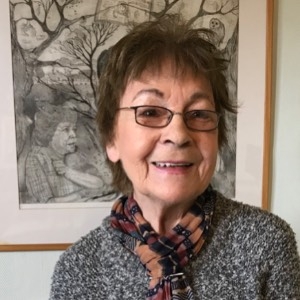 
Marjory Scott looks back on her childhood in Clyth where she attended the local school during the war years. Both her home and school were located next to the Wick and Lybster railway and she recalls the day the train made an unscheduled stop outside her house, when she decided to hitch a lift home from school. She also recalls the time that she and her brother placed some cutlery on the railway line to test the impact of the train.

On leaving Lybster School Marjory declined the opportunity to go to Wick High School but opted to attend secretarial college in Glasgow. On the completion of her course she returned to Caithness to take up employment at Dounreay.

She also talks about her many interests, including the writing of Haiku poems, attending a local writers’ group “Talking Volumes” and how she developed her interest in art.