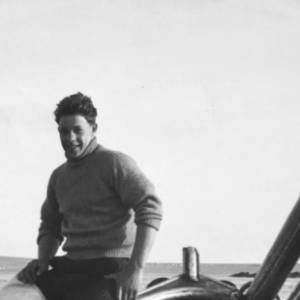 We were at sea all the time


John Manson was a member of the last family to leave Stroma in 1962.

This interview was recorded at his home in Scrabster, which is called "Stroma" and is full of reminders of the island. He has a thimble that came from the ship Pennsylvania after it went ashore in fog in 1931.

John recalls how his father, Andrew, had five sisters who all became teachers. He describes how the harbour was the hub of the island. He was going to sea from the age of about 9 or 10.

"We learnt everything from the older fishermen. Everything was handed down," John says. "There's not a rock in that Pentland Firth they didn't know about. There are four bad tides around Stroma."

He adds: "We spent the day at sea. We were at sea all the time."

John tells a story with a sad ending about an illicit still that was hidden from view in the Gloup. On a funnier note, he remembers an occasion when his mother's carefully laid tea table was ruined by a goat that was being chased through the house by a dog.

John explains how the Stroma Gathering was a popular social event for many years as exiled islanders met up to share stories.

John tells how Stroma lobsters were sent to London via Huna and Thurso: "London meant nothing but a market for your lobsters."

He also recalls the coal ship that came from north-east England once a year. Its arrival was quite a spectacle for the local youngsters.

John tells of some of the superstitions that were observed by fishermen. Pigs, salmon and ministers were felt to be unlucky.

John has taken part in TV programmes about the island.

"I think we just looked forward and hardly even looked back at the island when we left it," he says. "We just looked at a new life."

John has spent most of his life as a fisherman and his connection with the sea continues as he still works part-time at Scrabster harbour.

He spent 24 years as a member of the Thurso lifeboat crew and was Second Coxswain. He describes one of his most memorable rescue with the RNLI, on a night when there was a force 11 gale and a heavy swell.

This is the second interview John has done for Wick Voices. The first was recorded in September 2019 and can be heard here: