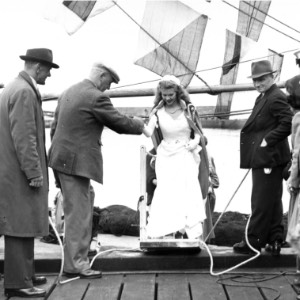 
Ray Richard (nee Mackay) was the first post-war Herring Queen in Wick. During this interview, Ray not only talks about the history of Wick's Herring Queen ceremonies but she recalls her own experience of being crowned queen in 1949.

She explains that the first Herring Queen event was held in 1937 shortly after the Coronation of King George V1 when it was acknowledged that there was nothing in the form of pageantry in the far north of Scotland and it was felt that it would bring some cheer to the town.

The first event was so successful that it was decided to make it an annual event. Unfortunately, the outbreak of the Second World War had an impact upon the town and the curing of herring ceased. It also meant that no Herring Queen ceremonies took place for a period of 10 years until 1949.

Ray recalls, "Again the queen and attendants were chosen by the pupils of Wick High School. My dress, a long white dress was made by Isobel Cormack who had been the Herring Queen in 1939.”

She describes how she and her attendants were conveyed into the harbour aboard the fishing boat, 'Royal Burgh' which belonged to William Shearer, father of the first Herring Queen, Reta Shearer.

She also talks about visiting patients in the Bignold Hospital, the crowning ceremony, and the procession of decorated floats through the streets of the town.