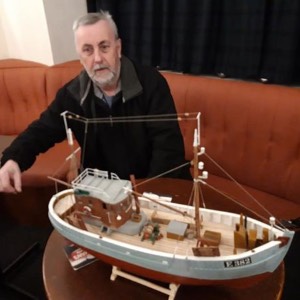 The harbour was our life


John Webster's hobby for many years has been making and restoring model boats. Based on the original builders' plans and photographs, he endeavours to create accurate models of original boats.

"My interest in model boats goes back to childhood and being a Pulteneytown lad, a lot of our time was spent around the harbour,” says John Webster.

During this interview, John vividly recalls the sights and sounds around Wick harbour where he and his friends spent much of their time. He recalls, "It was great fun for us lads to get on the boats and go for a wee sail. We were away on adventures from one harbour to the other and it took all of about five minutes.”

He talks about the excitement of identifying the boats as they approached the harbour. He also describes the various fish curing yards throughout Pulteneytown.

For periods of time both his grandfather and father were fish curers and as a young lad, John enjoyed trips to the harbour in his dad's lorry where he observed the auctioneers buying and selling the fish. John explains the process of loading the lorry, collecting ice from the ice factory before heading to their curing yard in Albert Street. Then it was a trip to the busy railway station to load the fish onto the fish train.

John talks about his father's and grandfather's wartime experiences. In particular, he mentions how his grandfather learned the skill of making ships in bottles. This fascinated John and he too acquired this skill.