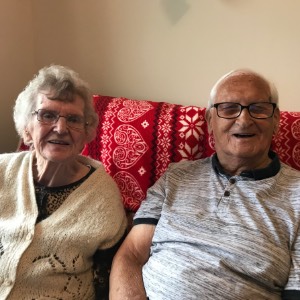 The Stories We Could Tell

Margaret starts this interview with a recent story about confusing a chiropodist with an optician.

She also tells how she broke all Olympic records” on two occasions. She explains how she made a dash to jump a stile when she encountered some young stirks on a visit to Bilbster. She also describes the panic she felt when she arrived at her home at the airport and realised that she had left her baby and pram outside the Post Office in Market Square in Wick.

She talks about the shortage of housing after the Second World War and explains how her mother-in-law became the first squatter at the vacated airport houses.

When Sandy returned to Wick after completing his National Service in the Parachute Regiment, he found there was a job shortage. He describes a range of jobs he undertook until he became a fireman with the Air Ministry.

Sandy talks about the occasion during the snowstorm of 1955 when fellow fireman John Shearer jumped out of the fire engine into a snow-covered static tank full of water. From that point on the static tank became known as Loch Shearer. In 1956 Sandy joined the Fire Service at Dounreay, where he worked until his retirement.

This interview took place at Pulteney House with the background sounds of a welcoming care home where Margaret and Sandy are residents.