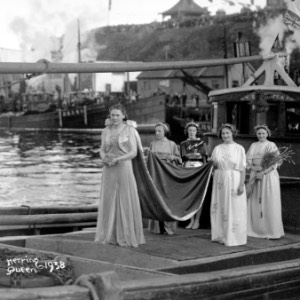 
Harry Gray, with support from Phyllis Gray, Ray Richard and Lynsey Bremner talks about the history of Wick's Herring Queens.

The first Herring Queen event took place in Wick in 1937 and was organised by a sub-committee of The Wick Riverside and Town Improvements. The idea for a queen and court stemmed from the 1937 Coronation of King George VI when there was a recognition that there was nothing in the form of pageantry on the north Scottish mainland.

Harry Gray not only talks about the Herring Queens, but he also explains the herring fishing industry from the late 1930s until its demise in 1953.

He explains, "The Herring Queen crown which is made of tinned copper with Ensign Armorial of Wick surrounded by symbols of the town's connection with the sea and the fishing industry. The insignia is surrounded by a rope, supported by two dolphins, and is leaning on crossed tridents and the frame of the crown is in the form of a net, with herring superimposed.”

The crown and cape are on display in the Wick Heritage Museum.

Although the last Herring Queen crowning occurred in 1953 there was a re-enactment in 2009. The chosen queen Lynsey Bremner, accompanied by 1949 Herring Queen Ray Richard, sailed into Wick harbour aboard the Isabella Fortuna, Wick's own heritage vessel. Mrs Ray Richard carried out the crowning ceremony and the circle was complete.

Harry concludes, "We will no longer see the sailing boats of yesteryear racing for the harbour or the steam drifters setting out for the fishing grounds, but nothing can take away the pride we feel for this town that was once the Herring Capital of Europe.”