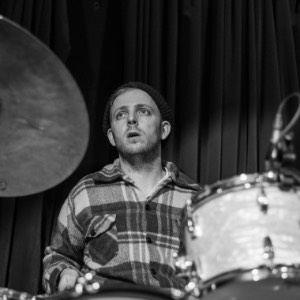 None of us could keep the smile off our face


"Growing up in Caithness felt pretty perfect to me, I enjoyed the peacefulness and the freedom,” says Darren Coghill.

During this interview Darren reflects upon his musical journey from playing drums in Wick Pipe Band, playing throughout UK and Europe with his father's band to songwriting and playing drums with the band Neon Waltz.

His grandfather Bobby Coghill was not only Pipe Major of Wick RBL Pipe Band, but he played accordion and fiddle in the Milton Trio and the Wick Scottish Dance Band, and he was also heavily involved in music education throughout the county of Caithness. Darren recalls that during Pipe Band Week his grandfather encouraged him to 'busk' outside D R Simpson's shop in High Street.

"I was excited by the drums,” he recalls so he was delighted when at the age of six he started drumming lessons with Willie Lyall. This led to Darren joining Wick Pipe Band where he played for many years. Later he was taught by Willie Lyall's son Grant with whom he enjoyed many lengthy drum conversations while waiting to 'drum in the beef' at Ackergill Tower.

He was also greatly encouraged by his father Bryan Coghill who played in the band, Colorado. Darren relished the opportunities to accompany his dad to various gigs.

He also recalls the support and encouragement he received from various music teachers, including Anne and Bob Hutchison who helped Darren and his mates when they formed a band while at Wick High School.

Throughout this interview, Darren talks of the strong bond of friendship he and his friends have enjoyed while playing music together in bands such as TBA and Jude.

"I always felt that we had denied some law of probability by having not only one band but two – full of our mates. We felt really lucky, especially in the band that went on to be Neon Waltz because we were writing our own music. To find six people in such a remote place like Caithness that not only wanted to write music but loved the same bands.”

Darren talks about taking up the position of musician in residence at Lyth Arts Centre where he has worked on various projects. He also acknowledges that the pandemic gave members of Neon Waltz the opportunity to concentrate on songwriting, which led to the recording of their latest album soon to be released.