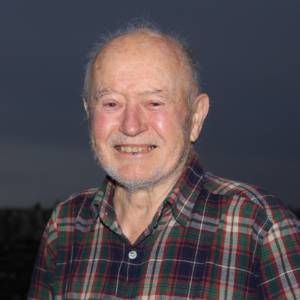 Achscrabster was a hive of industry


Originally from the Glasgow area, Bill Brown joined the UK Atomic Energy Authority in 1957 and moved to Dounreay after a spell working at the Windscale site.

After living in Thurso for a short time, Bill moved to nearby Achscrabster where he and his wife Jean brought up their family of six.

Over the years, Bill has acquired a lot of knowledge about the quarrying industry around Achscrabster and some of the characters who lived and worked in the area. He points out that the Dounreay runway was built by the Achscrabster quarrymen and explains why, when there was a big snowfall, the Achscrabster road was always the first to be ploughed.

"Latterly I discovered that this was actually a hive of industry," Bill says.

Later in the recording, Bill shares some of his memories of growing up during World War Two. He and his parents took refuge in an air-raid shelter in the cellar of their home on the night of the blitz on Clydebank. "We stayed there in the cold hoping that the bombs wouldn't fall on us," Bill recalls.

He also reminiscences about some of his cycling adventures and what it was like living for a time in Boston Camp, where Dounreay workers were housed in "very, very basic" accommodation.

Having joined the Scottish National Party 60 years ago, Bill has been granted life membership and is still an office-bearer in the party's Thurso branch.