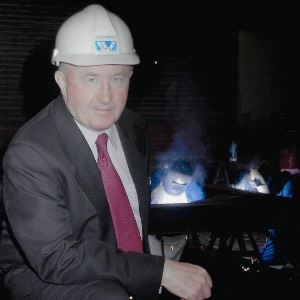 Welding was my forte


When Jock Campbell started his apprenticeship at the Harpsdale Smiddy he became the fifth generation of blacksmiths from the Campbell family, however he soon recognised that welding was his forte.

From the smiddy, Jock took up employment at Dounreay, where his technical skills and expertise were quickly recognised. Jock worked for various contractors throughout the site and soon became the go to person when problems arose.

In 1972, he undertook a significant welding and problem solving job for Rolls Royce as an independent contractor and this was the start of JGC Engineering.

Listen to Jock talk about the development of this family run company, which retains its core values of honesty and commitment to its workforce and customers. He explains how his wife helped to build up the company through undertaking a range of administration tasks, while looking after their four children. He also talks about his pride in the apprentice training scheme.

He reflects upon Royal visits, to the company buildings at Harpsdale and Janetstown, from the Duke of Edinburgh and Princess Anne.

Now retired, Jock enjoys more leisurely pursuits such as gardening, fishing, shooting and travelling, safe in the knowledge that the company is in the safe hands of the next generation of Campbells.