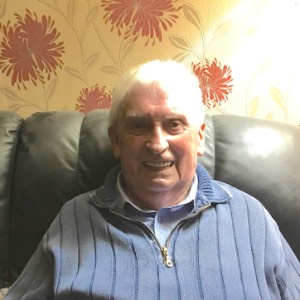 We had some good times and we had some hard times


Eddie Fraser reflects upon many of the changes that have taken place in Thurso, including the development of housing at Springpark.

Although born at Oldfield Farm, on the outskirts of the town, Eddie and his family spent many years living at Burnside, and he recalls that Scrabster harbour was his playground. During this recording, he recounts some stories about playing around the harbour with his friends.

He talks about the Transit Camp (near the Victoria Walk). This was a base for troops making their way to the Grand Fleet at Scapa Flow during World War Two.

Eddie recalls a vivid memory of a toy wagon and horses made for him by German prisoners of war.

He also remembers the long walk from his home at Burnside to the West Public School. In particular, he talks about his first day at school when he got into trouble for fighting with a classmate over a toy car.

"My first job was putting a new spring in a wind-up gramophone.”

However, when Derek Chadwick was awarded the contract to service boat radios, Eddie was the obvious choice as technician as he already knew many of the skippers as well as the boats in the area.

Due to his knowledge and expertise in radio communications, Eddie was asked to join Thurso's lifeboat crew as second engineer. He recalls some memorable experiences on the lifeboat.