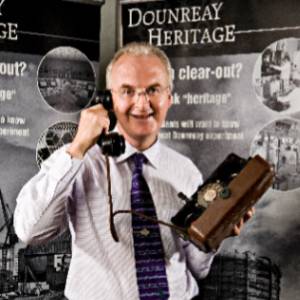 Capturing the heritage of Dounreay, part 1: A big chapter in Caithness history


The first of a two-part interview in which Dounreay heritage officer James Gunn reflects on the coming of atomic power to Caithness and the lasting impact it had on the community.

In this first recording he goes back to the early days and explains how men such as Sir David Robertson MP and Sir Christopher Hinton were instrumental in bringing the atomic project to Dounreay – after a range of other sites in Caithness and Sutherland, from Littleferry to Duncansby, had been considered and ruled out.

James describes how the Boston Camp was the base for huge numbers of workers as the reactor site began to take shape. As well as dormitories, the camp had shops, a cafeteria, bars, a cinema, a 24-hour sick bay, a post office, a library, a staff club and even a police station. “It was quite a hive of activity,” James says.

He also points to the important role played by Donald Carmichael, regarded as the first employee of Dounreay.

James emphasises how Dounreay stemmed the depopulation of the county.

Prime ministers and royalty were among the VIP visitors to the site, and pop stars came too – the 1960s group the Hollies were given a tour of the Dounreay exhibition. James also mentions how the Dounreay sphere made an appearance in the Eagle comic.

James has worked in the nuclear industry for more than 40 years.