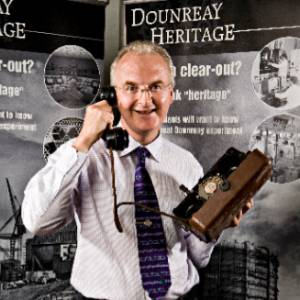 Capturing the heritage of Dounreay, part 2: Everybody worked together


The second of a two-part interview in which Dounreay heritage officer James Gunn reflects on the coming of atomic power to Caithness and the lasting impact it had on the community.

In this second recording James focuses on the social history aspect of Dounreay and the growth of recreational activities to keep the workforce occupied in their spare time. The Viewfirth social club in Thurso became the top local venue for leisure and entertainment, and big names such as Billy Connolly and Gerry Rafferty were among the performers at Dounreay Folk Club sessions.

James talks about the development of new housing estates for “the Atomics”, as the incoming workers and their families were known, and how the rising population led to the opening of new primary schools and the construction of Thurso High School – which became renowned as “the brainiest school in Scotland” in the 1970s.

He also highlights the success of Dounreay’s craft apprenticeship scheme.

James points out that the crofting industry flourished because of Dounreay.

Taking the story up to the present, he says: “Even though we are decommissioning there are still over 2000 workers at Dounreay today.”

James has worked in the nuclear industry for more than 40 years.