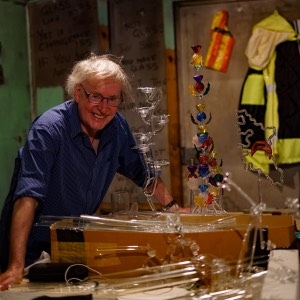 Glass Creations - Glass is my passion


Ian Pearson came to Caithness in 1981 to take up the position as Head of the Scientific Glass Blowing Department at the United Kingdom Atomic Energy Authority, Dounreay, Caithness, where he worked until his retirement in 2015.

"A lot of people think scientific glassblowers are very narrow, very disciplined but actually they are the most creative and imaginative people,” explains Ian. "We can make anything!”

Shortly after arriving in Caithness, Ian was invited to visit many community halls in the area, demonstrating his glass blowing skills to WRI groups. He enjoyed the experience and in return, "I had to judge the best marmalade.”

Ian set up the studio Glass Creations in Thurso in 1990 and continues to work there as a creative glass artist. He explains, "Glass is my first passion.” He talks about some of the creative pieces he has produced over the years.

In 1985 Ian became Editor of the Journal of the British Society of Scientific Glassblowers, a position he continues to hold.

Of his many prizes and accolades, Ian cites his Scottish Glass Society's 'Oddball of the Year' award in 1993 as extra special!

He has been a Beaver Scout Leader for over 35 years and is Chairman of the Society of Caithness Artists.