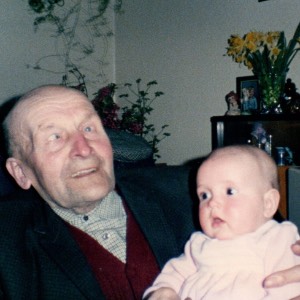 They talk about the good old days!


Listen to the late Davie Smith talk about farming life from the end of the First World War until the 1960s.

Davie left school in 1916 and worked for three years at Lochside farm, before moving to Barrock Mains, Lyth. He and his family later moved to Ackergill Mains where he continued to work for the Coghill family until 1961.

He talks about working conditions on the farm, harvest time and wages. He also explains the role of horses on the farm, prior to the introduction of tractors.

In addition, he describes various modes of transport including bicycles, motor cars and horse-drawn carts.

This interview was conducted in the 1980s as part of a job creation project funded by the Manpower Services Commission. The aim of the project was to collect memories of life in Caithness in spoken and written form.

The recording has since been digitised and re-edited.

With gratitude to the family of Davie Smith, for allowing Wick Voices to use the interview and to his grandson Peter Swanson for his introduction to the audio recording.