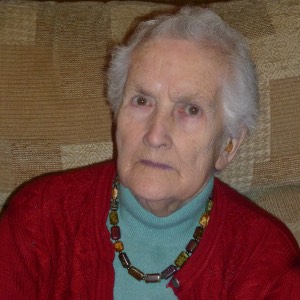 
Listen to the late Betty Swanson, nee Smith, talk about some significant events that occurred in Wick and the surrounding area during the Second World War. She talks about the horrific bombing of Bank Row and she also describes her narrow escape from machine gunfire near the Town Hall in Bridge Street, Wick.

She vividly recalls leaving work at the Bignold Hospital, one evening in October 1940, when she witnessed two objects falling from a plane. The objects were in fact the bombs which fell on Hill Avenue, resulting in the tragic loss of three lives.

Betty worked for a few years at Bridge of Earn Emergency Hospital. She recalls walking to the village at the weekends to the dances where Jimmy Shand and his band played.

Her enjoyment of dancing continued and she recalls how she met her future husband at a dance in the 'Rifle Hall' in Dempster Street.

This recording is the result of a series of reminiscence interviews at Pulteney House Care Home, where Betty spent her latter years. Her son Peter Swanson introduces the audio recording.

With gratitude to the family of Betty Swanson, for allowing Wick Voices to use this interview.

Elizabeth (Betty) Swanson passed away in 2019.