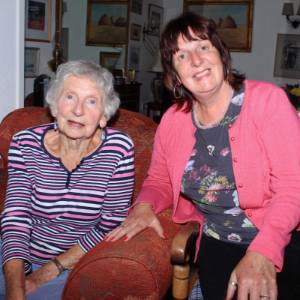 
Sheila Anderson (born 1934) and her daughter Pat Ramsay (born 1960) share a wide range of reminiscences in this joint interview. It was recorded in Sheila's home overlooking Staxigoe harbour where she and her late husband Robbie lived with their family after moving from Papigoe.

The chat covers everything from school days to favourite recipes, from bloomers hanging on washing lines to Sheilas's recollection of the first time she ever saw tomatoes and bananas… and how the soft paper in which oranges were wrapped was put to good practical use.

We hear about the teacher known as Mrs Hellabowgs who hired Acker's cab to travel to the village school; the time Major Manson dissected a squid for the benefit of his pupils; being self-sufficient in honey and veg; Sheila's cycling exploits as a member of Wick Wheelers; tattle-picking in St Andrews; an enduring fondness for traditional dishes such as rabbit stew and duff; and the dubious "honour" of eating cod eyes…

"We never wanted for fish," Sheila says. "We were quite well off - we never starved.