The Johnston Collection represents the work of three generations of Caithness photographers who captured images of life in and around the area between 1863 and 1975. During that period they produced around a hundred thousand glass plate negatives. Of these, around fifty thousand survive and are held in trust by the Wick Society.

The Johnstons captured an era when Wick was the herring capital of Europe. The silver darlings (as the herring were fondly known) used to attract over a thousand boats which crowded the harbour during August and September each year, and thousands of migrant workers would swell the town's population. They were photographed preparing the boats, setting sails, landing catches, and onshore in scenes of intense activity. Also photographed were teams of workers who gutted, cured, packed, and carted the salted herring for export across the world.

The collection represents a unique record of Wick's development and its importance as a major herring fishing port, as well as unique scenes from many other areas of industry and general life across Caithness and Sutherland.

The Johnston dynasty, over three generations captured a unique glimpse of a rich and exciting bygone era in the far north of Scotland.

In 1829 William Johnston (1804-1882) came to Wick to work on the lead flashings on the Parish Church which was to be opened in 1830. William found Wick to his liking seeing opportunities in the then burgeoning town, and so found accommodation in Shore Lane. He later married Louisa Williamson, the daughter of a local cabinet maker and together they had nine children. Alexander (1839-1896) and James (1854-1922) both became phtographers. 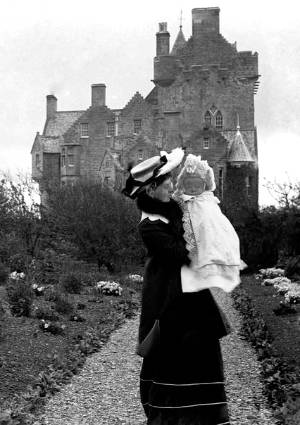 Alexander was the founder of the photographic business. He left school in 1853 at the age of fourteen in order to enter the family plumbing business as a clerk. He appears to have been of an artistic temperament and at this time his interest in the new art of photography was awakening. By 1863 he had set up as a photographer at his father's house in Willowbank. It was shortly afterwards that he set up his professional premises in the Parliament Square.

To the locals he must have seemed a strange figure as he walked the streets with his mobile darkroom and camera on a handcart in order to capture early images of the harbour scenes. In 1869, Alexander travelled to Kildonan in a bid to photograph the miners of the goldrush. A simple journey now, it then took four days.

Photography was beginning to capture the public imagination and by 1872, Alexander had to move to larger premises in Brims Buildings in Bridge Street (now Riverside Home). People began to visit him and his younger brother James (now a partner) to have their photographs taken. Between 1870 and the outbreak of the Great War, the firm was to take about 60,000 portraits of individuals, families, friends, workmates, and weddings. As the demand for individual photographs grew, they became very heavily committed to this but still found time to photograph outdoor events and street scenes, many of which still survive in the collection today.

The business grew, and by 1895 premises had been acquired in Thurso which were run by Alexander. Alexander was by this time of poor health, and in 1896 whilst he was in Edinburgh for medical treatment he died suddenly at the age of fifty seven years. His son William was now seventeen, and it appears he was already an experienced photographer. Together with his uncle James, the photgraphic dynasty continued, and he travelled to Thurso daily by train to look after the business there.

As well as being a photographer, James was also a talented artist with quite a prolific output. The John O'Groat Journal of May 3rd 1892 comments, "In the studio of Mr Johnston, Photographer, Bridge Street, there is to be seen at present a very fine collection of pictures done in crayon (pastels) representing many of the finest features of the Caithness coast scenery. All the pictures are executed with the artistic excellence for which Mr Johnston has secured wide fame and those with moonlight and water effects are most pleasing."

The Johnstons' Wick premises eventually moved to the Market Place in 1894, where they would remain for the rest of the business's years.

James passed away in 1922. William (1879-1950) shouldered the full weight of the business until his son Alex returned from art college in 1932 to join the business. The times were changing as more people acquired personal cameras but the company adapted and began processing films for the public and for the local chemists. The Thurso premises closed in 1938. In 1941 Alex was called up to the war effort and served as a photographer in the RAF for four and a half years, before returning to his profession as a photographer in Wick. William died in 1950 at which point Alex took on the mantle and ran the business until his retirement in 1975. Sadly, one hundred and twelve years of unbroken photographic service came to an end.