Thought to have been the northern transept of the ancient Kirk of St Fergus which stood on this site and was certainly in use at the time of the reformation in 1560. 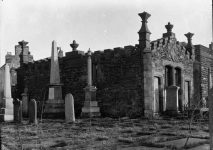 The building is thought to have been the northern transept of the ancient Kirk of St Fergus which stood on this site and was certainly in use at the time of the reformation in 1560. The Aisle is built from Caithness stone, quarried locally, the true date of its construction still remains a mystery, one day all may be revealed.

The crenulations on top of the walls were added in 1835 by the will of Miss Christine Sinclair of Stirkoke who took an interest in the Aisle around 1833. Also included in her will was enough money to roof the building, but that never happened. 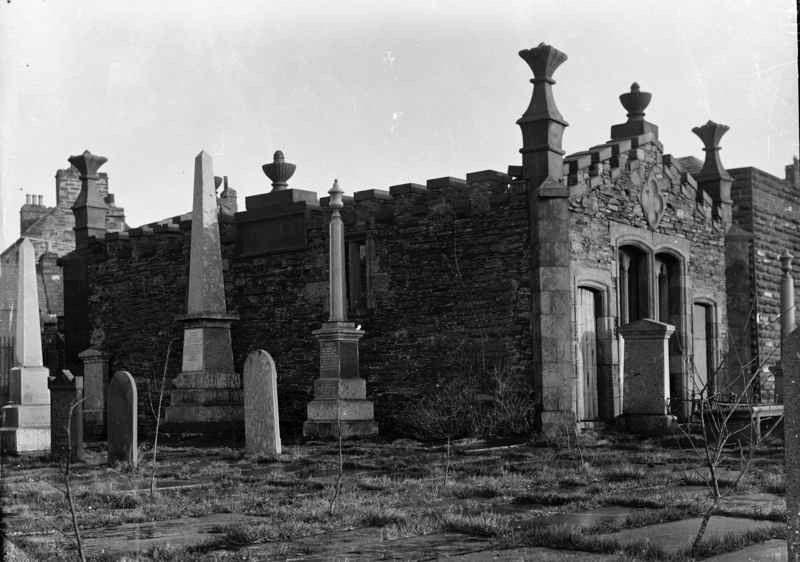 Many history books tell the story of John Master of Caithness and the way he is alleged to have died.

One of the many stories told by Sir Robert Gordon was that John Garrow, Master of Caithness, was imprisoned by his father, George the 4th Earl, and that his confinement had dragged out for seven years in a wretched existence.

When his keepers, David and Ingram Sinclair, his own relatives, set out to end his life, having kept him for some time without food, they gave him a large amount of salt beef and then refused him any water, leaving him to die of a raging thirst. One has to remember that Sir Robert Gordon was an avowed enemy of the Sinclair’s, especially the Earl. Two very eminent Caithness antiquaries, the late John Nicolson, and D.G. Henderson have both stated that the master did not die in prison but in his bed peacefully at Knockinnon Castle. It is quite possible that the Master served time in the dungeon for not carrying out his father’s wishes.

The Earl of Caithness sent his son who was known by the name of John Garrow, because of his great strength, {from the Gaelic word 'Garbh' meaning rough or strong}, to attack Hugh Murray, of Aberscors, and others of that name, residing in and about the town of Dornoch, and who were firmly attached to the family of Sutherland, and had taken refuge in the town and castle of Dornoch. The castle was besieged by John Garrow and his men, and for a while bravely defended, but in the end the Murray’s capitulated and having undertaken to depart out of Sutherland within three months, they delivered three hostages for fulfilment of the conditions. The Earl refused to ratify the treaty concluded by his son, and basely beheaded all three hostages. This took place in 1570 and in 1576 the castle of Girnigoe, which was at that period the baronial residence of the Earl of Caithness, is alleged to have become the scene of one of the most fearful atrocities on Scottish records. While conversing with his father, John Garrow was arrested by a party of armed men, who, upon a secret signal given by the Earl, had rushed in and fettered him in irons and carried him off to a dark dungeon below the castle. The reason for his arrest could have been that John had incurred the suspicion and the displeasure of his father the Earl, because of the treaty he concluded with the Murray’s and because he did not kill all the inhabitants of Dornoch when he had the opportunity. 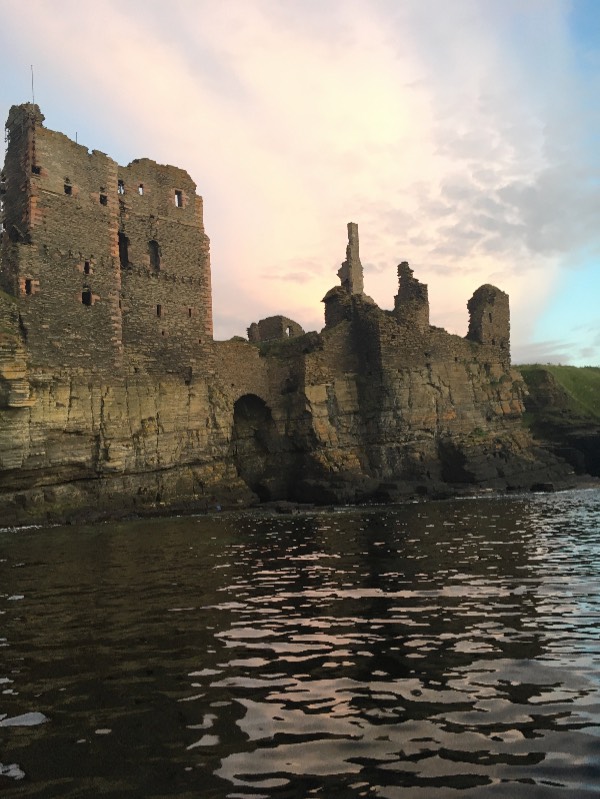 The body of John Garrow, Master of Caithness, is said to lay at rest in this vault below his father's in the Aisle at Wick. The sealed lead coffin still sits in the vault. The inscription on the slab that once sealed the tomb read as follows.

“HERE LIES ENTOMBED ONE NOBLE AND WORTHIE MAN, JOHN MASTER OF CAITHNESS, WHO DEPARTED THIS LIFE, THE 15th DAY OF MARCH 1576”

However, Scots Peerage states that he died by famine and vermin in September of 1575.

It was thought at one time that the body of Miss Sinclair could have been inside the lead casket, but that has now been dismissed because it has been proved that she was buried at Ulbster.

One story which could hold water and be true is that in about 1870 the Aisle was broken into by vandals and the owner who was then Sir John R. G. Sinclair, Bart, of Dunbeath who resided at Barrock House, Lyth and was the owner of that estate, decided to tidy up the desecrated vault and the remains of bones found in the vault. The bones were placed in the stone sarcophagus which was encased in a lead casket. There is not enough room in the vault to house more than one casket so if the story is true; it is quite probable that the stone sarcophagus inside the lead casket houses the body of John Master of Caithness.

Professor Eric Talbot, a lecturer in medieval archaeology, stated that the roof lining of the vault is 19thcentury and this might be one of the repairs carried out by Miss Sinclair of Stirkoke. On the base of the lead casket at the West end, the name SINCLAIR can be made out stamped out in the lead. This must have been done by Sir John R. G. Sinclair, Bart of Dunbeath when he had the lead casket made and reinterred into the vault.

John (Garrow) Sinclair had married to Lady Jean Hepburn in January of 1566, she, being the widow of John Stewart {Lord Darnley}, the only daughter of Patrick, the 3rd Earl of Bothwell, and his wife Agnes who was daughter of Henry, Lord Sinclair. Lady Jean gave issue to four sons, and one daughter, who married Sir John Home of Coldingknows. The eldest son George became the 5th Earl of Caithness. The 4thEarl’s, second son, William of Mey, who died an unmarried young man, left two illegitimate sons by different mothers, the eldest of whom, Patrick, was the first laird of Ulbster. He also died unmarried and was succeeded by his brother John Sinclair of Ulbster who thus became the ancestor of the Sinclair's of Ulbster.

The 4th Earl's third son, George, was given the lands of Mey on the death of his elder brother William. He became the ancestor of the Sinclair's Baronets of Mey, who in 1789 inherited the Earldom on the extinction of the senior line descended from the Master. 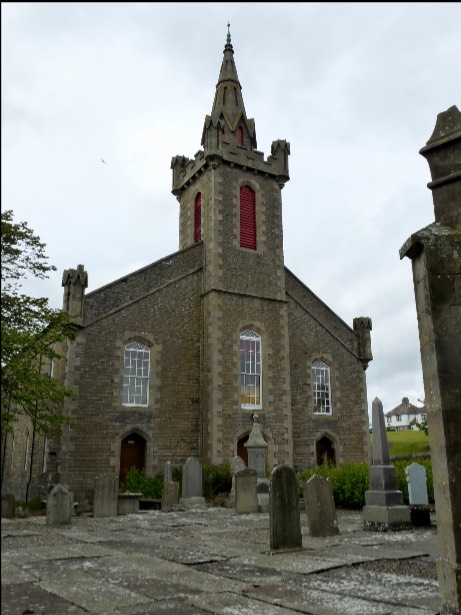 Grateful thanks to Harry Gray and St Fergus Church for this information http://www.wickstferguschurch.org.uk