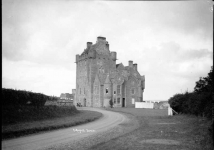 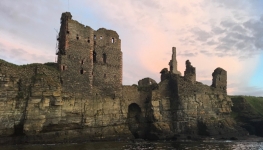 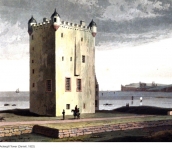 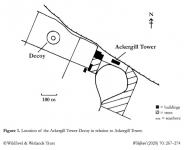 Ackergill is framed on one side by Sinclair Castle and on the other by Ackergill Tower. Two sites that hold a great deal of our history.

Both were the scenes of tragic deaths and while one now lies in ruins the other lives on, and although now in private ownership, its very physical presence reminds of its rich heritage. 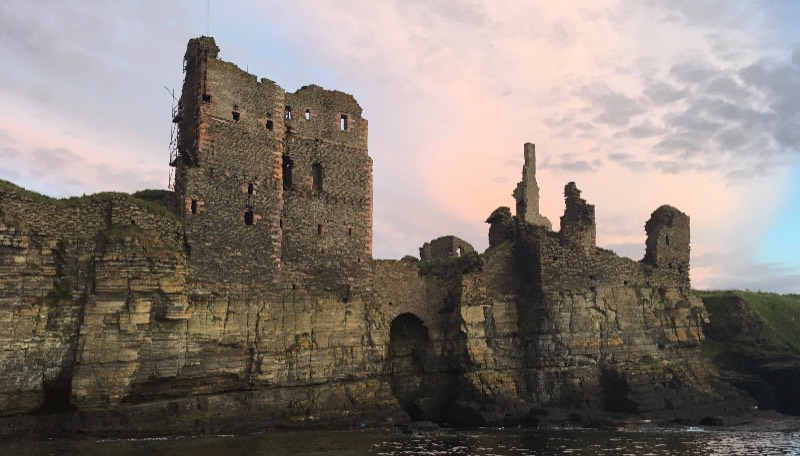 Sinclair Castle was the scene of the alleged filicide when George, the ‘wicked earl’ placed his son in the dungeon and fed him salt beef. The veracity of the means and motives for this act remain clouded in legend and half histories.

The details of the death of a young woman in Ackergill Tower however are on somewhat sounder, if still debatable, historical fact.Around 1400, the nationally powerful Keith family held Ackergill Tower and one of their sons, Donald Keith took a fancy to the beautiful Helen Gunn of Braemore. Helen however was already promised to her cousin, Alexander Gunn. Keith’s proposal therefore was rejected, and his response was to have her abducted and taken to Ackergill Tower, where she was held against her will. The desperate and dejected Helen took the unfortunate fatal step of throwing herself off the Tower. The ghost of Helen continues to walk the floors of Ackergill Tower. 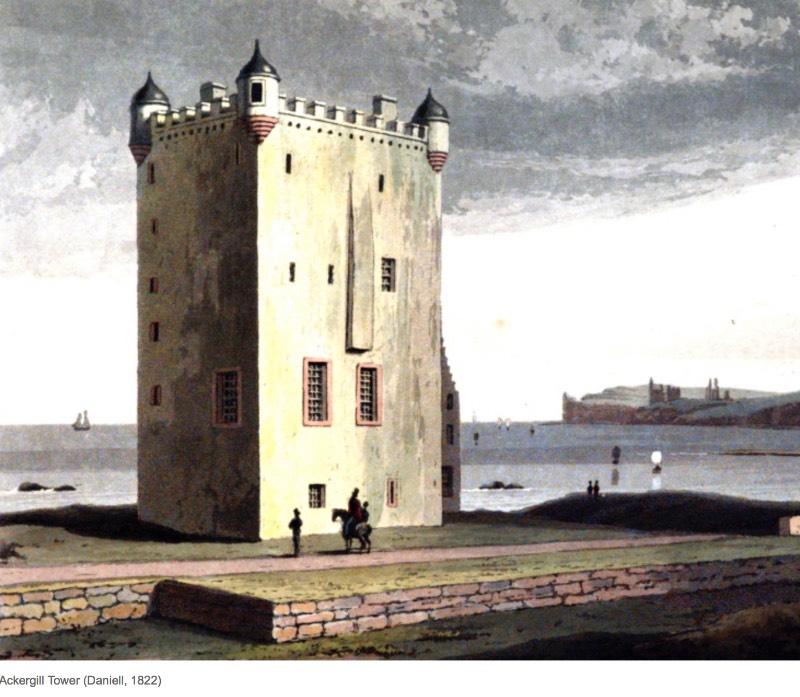 The feud between the Gunn and the Keith families was to be settled in the usual Middle Ages way – a fight. The location was to be at Ackergill’s Saint Tayre’s Chapel (situated on headland below the farm of Shorelands) and each side was to be represented by 12 mounted horse.

The Gunn contingent turned up with 12 horses and 12 men.

The Keiths however came with 12 horses but 24 men (2 to each horse). The result is now known as the Massacre of Saint Tayre’s and allegedly only one Gunn left the field alive. 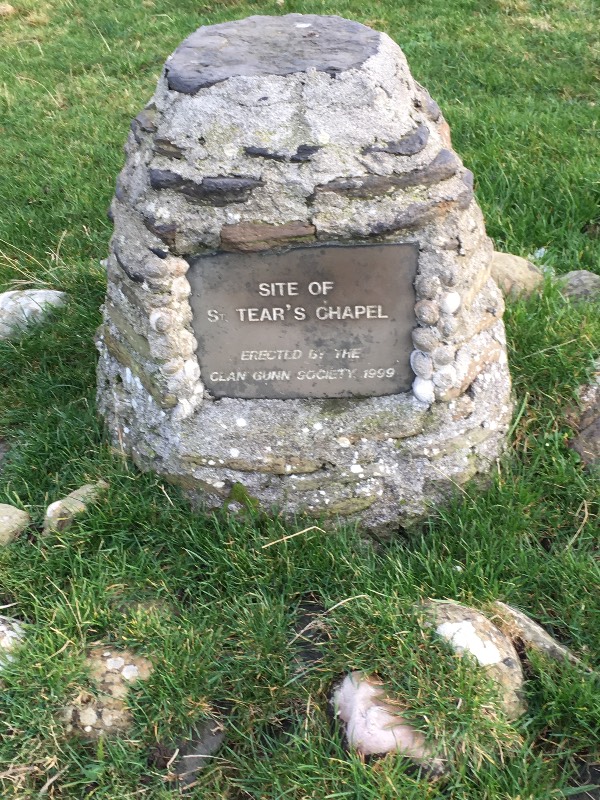 Much of all this is a mix of legend, anecdote and a little pocket of known fact, but nevertheless it is part of our heritage.

In later times Ackergill Tower became the property of the Dunbars of Hempriggs  who took an improvement stance and developed the surrounding area into productive farming and fishing.

The Tower was extended, the Mains farm became a model of stock rearing and crop growing and a fishing village at Ackergill was initiated. Through a sequence of deaths without heirs, and marriages the family name became Duff-Dunbar and Lady Duff-Dunbar continued to take an enthusiastic interest in, and support of the community. She also had a strong interest in archaeology, especially when Viking graves were discovered in the vicinity of the Tower

Today discoveries continue, and can be read in an article in the ‘Wildfowl’ Journal, by Robin Sellars. It highlights and describes ‘An unusual and Overlooked Duck Decoy’ near to Ackergill Tower. (Copy of the article available from The Wick Society) 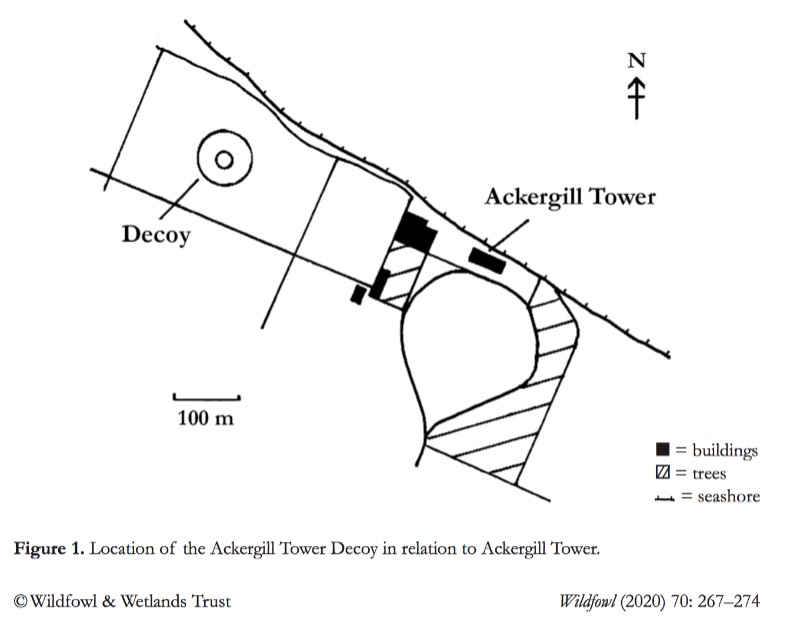 The Wick Society has also benefited from the support of the Dunbar family. The current Sir Richard Dunbar is a valued supporter and the Wick Heritage Museum proudly displays two chairs gifted to Lieutenant Kenneth Duff-Dunbar on the occasion of his marriage. 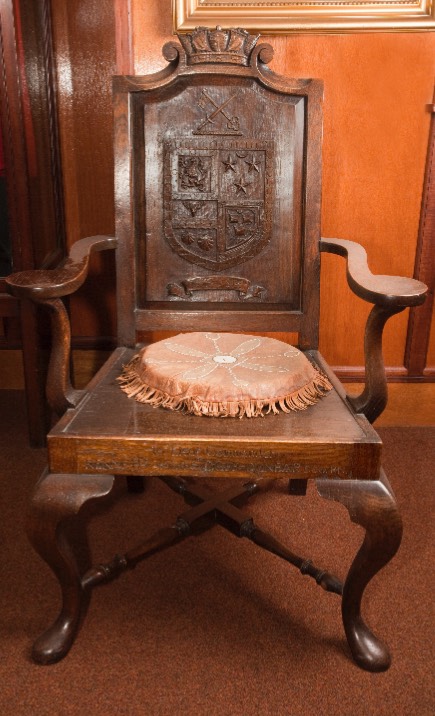 The Johnston Photographic Collection hold a number of photographs of Ackergill and Ackergill Tower and there is even a childhood memory piece on Wick Voices - https://www.wickheritage.org/voices_play.php?id=2210201914125639936

Our heritage is out there – know it and cherish it.